“Our new data shows that despite the introduction of the second national lockdown, credit card spend increased in November, as Christmas shopping got underway, boosted by Black Friday,” explained Stacey West, principal consultant for FICO® Advisors.

“Spending on UK credit cards is now only 2.6 percent lower than a year ago; either consumers are feeling confident enough about their finances to increase their spending levels or they simply need the cheer of Christmas to counteract the continued gloom of COVID-19, whether they can afford it or not. The concern is that a proportion of spend is being funded by the current government financial support for those on furlough. Payment holidays on existing credit agreements are also probably taking the pressure off outgoings and giving some consumers a false sense of financial wellbeing.

“There could be a real issue after Christmas as payment deferrals come to an end in early 2021 and furloughs at the end of April (unless they are once more extended). Christmas debts will be unmanageable for some. The sudden introduction of tier 4 and the anticipation that these measures will be in place for months means extra pressure and hardship on many businesses, especially at one of the most profitable times of year.””

Average spending on UK credit cards increased by £19 to £638 in November and is now only 2.6 percent lower year on year. 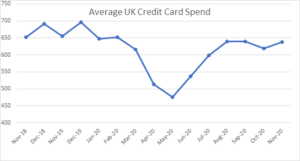 Average card balances are, however, at their lowest in the last six years, down 8.9% on November 2019, even though growth in balances is normally seen in this month. This is being influenced by consumers with credit card limits below £5,000 as there has been growth on higher limit cards. 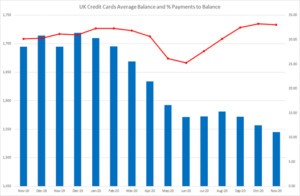 “The lower average balances are a sign of some consumer spending caution and the reduction in in-store spending options,” added West. “Lower average balances and the financial support mean that it is not surprising to see a higher percentage of the balance paid each month. Although the drop is a seasonal trend, this is normally in conjunction with higher balances, this has not happened this year. This fall could be an early sign of financial stress as some consumers struggling to maintain their payments outweigh those paying more due to having a lower balance.”

Lender action to stave off a potential debt tsunami early in 2021 is revealed as average credit card limits continued to fall by a further £57 to £5,325. Ramping up limit decreases and/or a reduction in limit increases can be behind this trend. Accounts open more than five years reached their lowest average credit limit in the last two years. The highest proportion of accounts, 28.6 percent, remain in the limit range of £5,001 to £10,000, with an average balance of only £1,251.

“Although there was a continuing decrease in the average card limit, it is falling at a slow rate each month. This means that the concerns expressed in the October review around the potential for unaffordable balance build at this time of year remains,” commented West. “The full picture will not be clear until the end of the payment holidays and furlough payments in 2021, so there is time for both the issuer and consumer to work together to reduce the likelihood of this happening.”

“With the introduction of the harsher tiers in December and new tier 4, resulting in further furloughs and job losses into 2021 combined with rising seasonal spend, there is going to be a proportion of consumers who will be turning more and more to their credit card for their everyday needs, adding to the normal rise we see in debt levels at this time of year. Transactional information could be crucial for issuers to help identify the customers showing a heavier reliance on their credit card than usual. This may, however, prove quite complex as spending patterns will already have changed as consumers increase their online card usage and reduce the volume of cash transactions.”

Of greater concern is the percentage of accounts and balances with two missed payments, which increased for the fourth consecutive month. The average balance on these accounts grew to over a two-year high in November. Here too, there has been large annual growth in the average balance, which is now £252 higher than November 2019. For three missed payments it is £411 higher.

West added: “We are now starting to see that consumers missing payments have higher average balances. There are also signs that once a payment is missed, this is never recovered. A robust pre-delinquency process is, therefore, more important than ever to prevent the customer going down the collections route. Pre-collections treatment can open the dialogue on the sensitive subject of financial difficulties and help avoid negative actions and increased stress once payments start to be missed.

“Issuers implementing data-driven pre-collections and collection segmentation will ensure that the highest priority accounts are worked first, and that the most suitable treatment is offered to their customers at the right time via the most appropriate channel. This in turn will mean that their customers have a more positive experience.”

Further signs of improvement for accounts exceeding their limit

The proportion of accounts exceeding their limit fell to over a two-year low and is now 45.1 percent lower than November 2019. The average amount over limit fell month on month, albeit by only £2, and is still 27 percent higher a year ago.

“Historically, accounts that have exceeded their limit but have no missed payments are a lower priority in collections,” West added. “However, there will be a subpopulation of these accounts that are at a higher risk of missing numerous payments than some accounts that have missed one payment. This is another area where data-driven strategies have been used to highlight accounts that need faster attention and actions than lower-risk 1 cycle accounts, sometimes called lazy payers.”

Despite the increase in average spend, the reduction in hospitality and in-store spending options in November resulted in a further decrease in cash usage on credit cards. The percentage of consumers using credit cards to get cash fell 7.1 percent in November; levels are 55.2 percent lower than November 2019. This has resulted in a 5 percent decrease in cash as a percentage of total spend, 31.3 percent lower than a year ago. With the tiers set to continue into 2021, the introduction of tier 4 and more regions at the harshest level, it is anticipated that there will be a further decline.