With warnings of cyberattacks happening around the world, new research reveals the countries across the globe that are the most (and least) at risk of cybercrime threats.
To find out if the dangers of cybercrime are equally spread across the globe, the anti-fraud experts at SEON combined cybersecurity indices and indicators, to reveal the countries that are the most (and least) risky for internet users.
The lowest risk countries for cyber threats: 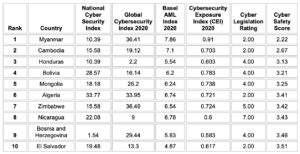 Myanmar is the worst country for internet safety, scoring just 2.22. Myanmar scores poorly across the board, especially in terms of legislation, as hardly any has been enacted to put barriers in the way of cybercriminals.
In second place is Cambodia, which earned a Cyber-Safety Score of 2.67 overall. Another Southeast Asian nation with poor internet security.
Further Study Insights:
http://www.ccrmagazine.com/wp-content/uploads/2022/02/Web-news-template-92.jpg 555 880 Stephen Kiely http://www.ccrmagazine.com/wp-content/uploads/2018/01/New-web-web-version-300x36.jpg Stephen Kiely2022-02-18 09:39:092022-02-18 09:40:43The UK is 5th lowest risk country for cyber threats, according to new research