The latest research by property purchasing specialist, House Buyer Bureau, has revealed that the UK property market is grinding to a halt, with the average level of monthly transaction over the last six months falling by almost a quarter compared to the previous six months – although in some areas this decline is as high as 43%.

House Buyer Bureau analysed sales volume data from the Land Registry, looking at the average number of monthly property transactions to have taken place in the last six months (January 2022 to June 2022 – latest available). They then looked at how this level of market activity compares to the six months prior (July 2021 to December 2021).

The research shows that in the last six months, an average of 61,651 homes have been sold across the UK on a monthly basis, 23.8% fewer than the 80,958 sold per month in the previous six months.

It appears that the market is running out of steam across the board, with every area of the UK market seeing a decline in average monthly sales volumes at a regional level.

While the London market has been far more muted during the pandemic property market boom, the silver lining is that the capital has been less susceptible to the current market slowdown. While all other regions have seen a decline of at least 20%, the London market has seen the average number of monthly transactions fall by just 8.4% in the last six months.

At local authority level, the market is grinding to a halt to the greatest extent in the Forest of Dean. There have been just 71 homes sold per month over the last 6 months, down 43.1% versus the previous six months when 125 sales completed on average each month.

Managing Director of House Buyer Bureau, Chris Hodgkinson, commented: “We’ve suspected for quite some time that the market was beginning to lose momentum following such a sustained period of heightened market activity.

“While there has yet to be any notable decline in topline house prices, we’ve seen previous signs that mortgage approvals were stuttering and we’re now starting to see this translate to a drop in transaction levels.

“This decline is only going to intensify moving forward, as the increased cost of securing a mortgage continues to climb to some of the highest levels seen in years. With more buyers being deterred from entering the market, sellers will start to find that they simply can’t expect to secure the same price as they would have during the dizzying heights of the pandemic market boom.

“As this pendulum shifts, there’s no doubt that house prices will start to fall and it’s only a matter of time before this decline surfaces.” 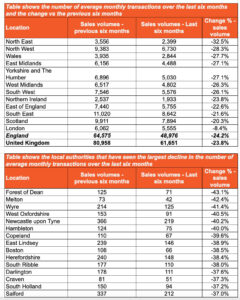