Market analysis by Unlatch, the new homes sales progression and aftercare platform for developers and housebuilders, has found that while Britain’s property developers can expect to see a seasonal slump in new-build transaction levels over the impending winter months, they will, at least, see a boost to the price achieved.

Unlatch analysed new-build sector data for both transactions and the average house price achieved by each season going back over the last 10 years.

The research shows that when it comes to new-build market activity, the winter months of December, January and February are the quietest time of year for developers within the sector.

Over the last 10 years, an average of 21,674 new-build sales have completed during the winter months, equating to 22.4% of total sales seen in the year. The busiest season is summer, accounting for 27.8% of average annual transactions over the last decade, followed by autumn (25.5%) then spring (24.3%).

This suggests that not only is winter the quietest month for the sector, but it’s becoming quieter as time goes by.

There is one silver lining for the nation’s developers facing a long cold winter of muted market activity. The price achieved to the average new-build is by far its highest during the winter months, averaging £375,860 last winter, with autumn the second best month where price achieved is concerned at an average of £353,175.

What’s more, the average new-build house price during the winter months has increased by 86% over the last 10 years, with autumn seeing the second largest increase at 73%, followed by summer (63%) and spring (61%).

Lee Martin, Head of UK for Unlatch says: “For the property sector as a whole, the winter months often bring a lull in market activity, as we turn our minds to Christmas initially, followed by a period of muted market activity as we start the cogs turning again after the festive break.

“However, one common misconception is that a drop in demand will also cause house prices to plummet, but this isn’t always the case, particularly within the new-build sector.

“In fact, new homes sold within the winter months achieve a far higher price when compared to the other four seasons and this is largely due to a steady stream of high quality buyers, often from abroad, many of whom aren’t deterred by the Christmas chaos that sweeps the nation. It is also worth noting that Boxing Day sees the highest flow of traffic on sites such as Rightmove, where it’s usually a time that people start thinking about a change in home and personal life situations.

“So while many developers may well be facing a quieter period over the coming months, those sales they do get over the line are likely to be well worth the effort, very much a case of quality over quantity.” 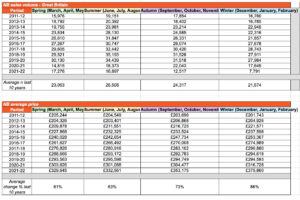