FICO’s report of April 2022 UK card trends shows some early signs of the impact of the widely reported cost-of-living pressures. The monthly report based on the largest consortium of UK cards data shows a typical rise in card spend and balances, but also a slight increase in missed payments. Average monthly spend hit £760, tied with December 2021 as the highest in more than two years. 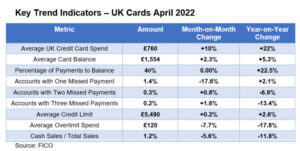 Much of the April data suggests that credit card behaviour is following typical patterns, exhibiting typical post-Christmas spending and repayment trends. The percentage of repayments to balance is flat month on month, suggesting continued financial prudence.

The signs of the cost-of-living crisis are still limited, with the biggest area of concern being a 3 percent increase in the average 1 payment missed balance month over month for new cardholders (less than 12 months). Typically, the higher-risk accounts are more credit hungry, so lenders will want to be vigilant in monitoring this trend.

FICO believes that inflationary impacts will be worst for those already identified as in persistent debt or potentially new candidates for that designation. Populations most vulnerable to inflation include those living on fixed incomes, as well as lower-income households without savings in reserve, especially where wages are increasing more slowly than the cost of living. Lenders are encouraged to perform segmentation analysis on their portfolios, to ensure that their web and mobile applications encourage consumers in distress to make contact at the first indications of difficulty, and to consider establishing special payment plans for those in inflation’s grip. 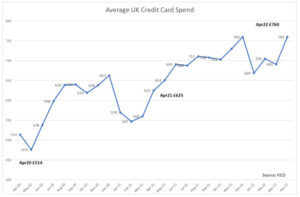 These card performance figures are part of the data shared with subscribers of the FICO® Benchmark Reporting Service produced by FICO® Advisors, the business consulting arm of FICO. The data sample comes from client reports generated by the FICO® TRIAD® Customer Manager solution in use by some 80 percent of UK card issuers.

Over one in five Brits suffer from mental health issues due to their financial...
Skip to toolbar
Scroll to top