Data covering quoted household interest rates on consumer credit products released by the Bank of England this week reveal the rising cost of borrowing for UK households according to analysis by Freedom Finance, one of the UK’s leading digital lending marketplaces.

With the Bank hiking interest rates by 0.25bp last Thursday and inflation expected to show a climb yet again for April, the data demonstrates the difficult decisions many families face with their money particularly those less able to rely on cash buffers.

Overdraft interest rates have surged since the start of the pandemic rising 62% from 20.99% in February 2020 to 34.07% in April this year, the highest level since the data series began in 1995. The latest UK Finance data2 also reveals that overdraft balances have worryingly started to increase through 2021 indicating growing stress on household budgets.

Credit card rates were broadly level with overdrafts until the pandemic hit. However, while they are rising more slowly and have dipped slightly of late, they have still edged back to levels last seen in the late 1990s. Rates were 21.40% in April 2022 and have been approaching 22% – a barrier which has not been breached since December 1998. 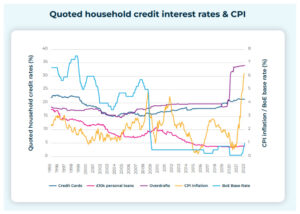 The cost of borrowing on £10k personal loans bucks the trend and remains well below historic levels at 3.96% although it has shown recent signs of growth in ticking up from a low of 3.37% in September 2020.

David Hendry, Chief Marketing Officer at Freedom Finance, one of the UK’s leading digital lending marketplaces, commented: “The rise in overdraft and credit card rates are a further wake-up call for households in the UK that it is not just mortgage borrowing that will become increasingly expensive in the near future.

“Overdrafts have become a hugely expensive way of borrowing with rates surging above 30%, despite being broadly in line with credit card rates until the pandemic hit. Overdraft balances have been starting to increase again of late and this will be an important trend to monitor as the cost-of-living crisis unfolds, and we would urge households to see if they can transfer existing balances to cheaper forms of debt.

“There has been a recent spike in credit card borrowing too according to the Bank of England but rates are increasing here also and could soon reach their highest level in over 20 years.

“As a result, we are expecting to see an increase in demand for lower-cost personal loans as households look to manage their finances and consolidate these higher-cost forms of borrowing into products with lower rates.

“After paying down their most expensive debt, the next priority for households should be shopping around when looking at credit and using digital marketplaces to ensure they are applying for products they are eligible for at the very best rates to avoid harming their credit score through failed applications.”